Friends, I've recently made a disconcerting discovery.  They're called "rice cakes" and when I first heard of 'em, I thought they'd be like cake, which I love, except made with rice, which I like quite a bit.

They're not even close.  They're dry and crunchy, like a cracker.  I bit into my first one, expecting a little cake, and instead, I could feel all the moisture leaving my tongue.  It was just awful, and I'm not going to lie.  It sort of put me on the wrong foot with rice cakes.

To be fair, if you're expecting a rice cake to be all dry and crunchy, they're not bad.  They go really well with a hot beverage.  They pair nicely with a cold beverage.

I've been around for a little bit, and you know how much I love cake.  At one point, there was even talk of me having a "problem" with cake.  I have no such problem WITH cake.  I don't!  I can have cake around and I really like it.  I get along well, quite well WITH cake.  The problem starts when I'm WITHOUT cake, by golly. 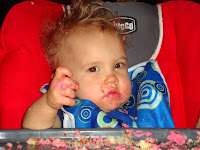 Cake.  It's soft and sweet and moist and if you mash it, it makes crumbs.  You can rub those crumbs in your hair for a fun and festive effect.  Remember this picture from my first birthday?  Don't I look happy and festive with all that wonderful cake?  I thought so!

Another thing cake has is icing.  My mommy will debate this with you.  She says that nothing's better than chocolate cake, right out of the oven, with no icing on it.  I say pish-posh to that.  There's a reason they say something great is "the icing on the cake," and that reason is that cake is good, and then the icing on top just makes it that much better!  Icing is fabulous!

Mommy and I definitely agree that these rice cakes bear no resemblance to Cake, though.  Because all those things that I said Cake is, rice cakes are not.  If you mash rice cakes, all you have is a pile of rice cake crumbs that you can blow away with just your breath.  You can't rub them in your hair for festive texture and color.  You can't mux them all back together and have a denser, flatter version of cake on your plate.  There might be a little flavor on a rice cake, but there isn't icing on a rice cake.  Don't even fool yourself, Big People.  It'll just lead to heartbreak and disappointment.


Now that our Internet From Outer Space is working again, I was able to do some investigating on other things that are called "cakes" but they aren't really cake.  Urinal cakes are the most egregious use of the word I could find.  It's so disgusting that I think if you're a Big People and capable of reading my words, you already know what a urinal cake is and what it's for, and I think that's just an awful use of the word.  I know they're also called "urinal mints," which is almost as bad, but not quite, because I don't love mint as much as I love cake, so it doesn't offend me quite as much as if I loved mint as much as I love cake.  Follow me?

I think they should be called "urinal blocks" and just leave it at that.  No need to bring cake or mints into the bathroom, because the bathroom's dirty.  *KsxxxxXXXXXxxx!*

Maple cakes, too.  Now, I've had a piece of one of these.  They're wonderful.  But they're just little candies made of maple sugar.  Mention "maple cake" to me, and my first thought is a big, moist, fluffy cake made with maple throughout, and maple in the icing.  I think we should stick to calling the maple sugar pressed into shapes like maple leaves and such "maple candy," to avoid confusion.

Finally, there's "cake of soap."  Nothing about this sounds delicious.  It's up there with "urinal cake," but not quite as up there.  It's another example of how you shouldn't put food next to something that isn't food, even in a descriptive manner.  I think "cake of soap" is falling out of favor in modern parlance, anyway, so I don't anticipate much argument when I suggest calling them "bars" of soap.  A bar can be a lot of things.

But when anybody says "cake," I'll betcha the first thing four out of five people think of is a beautiful fluffy, moist, sweet, delicious cake on a cakestand, all iced up with beautiful, delicious, sweet buttercreme icing.  Meringue-based buttercreme icing.  Doesn't even need to be decorated.  Just iced in a nice fashion.  I mean, keep it simple, for Pete's sake.  The kind of cake that you can mash up, and then take your fork and push back together the crumbs and have 'em hold together.

That's what four out of five people think of when anybody says "cake," and the only reason Number 5 doesn't think of that is because Number 5 was on his cellular telephone when the word "cake" was uttered.  I don't know what he was talking about.  Probably ordering a pizza or something.  It doesn't matter.  What does matter is Number 5 would also think of the wonderful cake, and not a rice cake or a urinal cake or a cake of soap.  I know he would.  So really, five out of five people agree with my interpretation of the word cake, we'll just say.

So let's stop calling things that aren't cake Cake, shall we, Friends?  Those sad little rice cakes wouldn't be so sad if we stopped setting them up for failure by calling them cakes.  How 'bout 'Rice Crunchies.'  That's a nice, neutral thing to say about 'em.  Doesn't set up expectations one way or another.  If somebody said to me, "Want some rice crunchies, Zoe?" I'd say "Yeah!" and know to ask for a beverage to go with, to keep my tongue from having all the moisture pulled out of it.

In the end, it's all about effective communication, Big People.  That's all it is.

Awwwwwwww.  I love ya, Friends!  Muah!